A review by the Local Government Boundary Commission for England (LGBCE) has published a set of proposals for changes to wards in the London Borough of Enfield. The last changes to ward boundaries occurred in 2002. The major change in these proposals would see the number of wards increase from the present 21 to 26. At present each ward elects three councillors; under these proposals there will be 15 wards electing two councillors and 11 electing three, making an unchanged total number of councillors of 63. The proposals are subject to Parliamentary approval, and if agreed, would come into force for the 2022 local council elections.

These proposals should not be confused with Parliamentary constituency boundaries, which are also the subject of a review, now much delayed. However, there is likely to be some connection as Parliamentary boundaries are composed of whole wards. 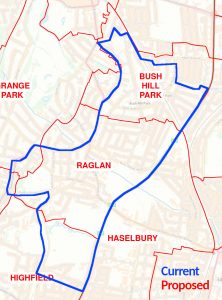 A second significant change would see the western boundary of Bush Hill Park and Raglan wards becoming the New River, rather than the A105 as at present. In many ways these boundary proposals resemble the situation prior to the 2002 review.

Currently the population of BHP Ward is around 11,000. The proposed division creates two smaller wards each of roughly 7,000—providing approximately the same ratio of population to each councillor.

The proposals do not affect the operation of the Residents Association beyond the fact that today we deal with three ward councillors and, if approved, we would deal with four. Indeed the proposals may help eradicate some confusion whereby some people have thought we represented the ward, whereas the BHPRA has always represented the postal area. Under these proposals this conforms somewhat more closely to the combined wards of Bush Hill Park and Ralgan than the current ward.

If you wish to submit your own comments on the proposals, you have until 5th August 2019.  See this post for more details, including how to submit responses.